The Ames Street Reserve and Ames Street is named after one of Paekākāriki’s pioneering families.

Mariner James Ames was the first of his family to be associated with the Paekākāriki area. He was Master of a schooner which traded between Sydney and the West Coast of New Zealand. He arrived in Kāpiti on the ship Star of China in 1839. He had married Mary Ann in Sydney the previous year and they had six children. In 1841 they settled on Tokamapuna (Evans Island), a small islet off Kāpiti Island. War canoes filled with Māori arrived on the island in 1843. Mary Ann, with only women and children present, was said to have pretended not to be afraid. And she fed the ship’s party – as instructed by Te Rauparaha.

The family remained on the island for almost two years – with Te Rauparaha as their neighbour. They left the island late in 1843 and became hoteliers in the Hutt Valley and Wellington (South Sea Hotel, Lambton Quay). Mary Ann went on running the hotel after James’ death in 1850. The hotel was destroyed in the 1855 earthquake. Later she ran a Johnsonville hotel and remarried. She died in 1887. Mary and James had eight children: seven boys and one girl.

Horace Ames was born in 1847. He married Ellen Louisa Hughes in 1875 and the couple had seven children. Herbert Ames, who was born in 1884, was a Sapper in World War I. On his return home he rejoined the New Zealand Railway Department. In 1924 he married Topeara Maewa Swainson of Ngāti-Raukawa, Ngāti-Huia and Ngāti Toa descent. She was a direct descendant of Topeora, the only chieftainess to sign the Treaty of Waitangi. The couple later made their home in Paekākāriki where, in the 1960s, the family was known as the ‘Railway Ames.’ Herbert died in Paekākāriki in April 1965. The naming of Ames Street reflects the close relationship the family has had with the district from the 1840s.

The family was active in the district; members were involved in the early days of pit sawing, shooting, rugby and tennis. “The first tennis court was a piece of paddock along Ames Street beyond the present village hall. It was particularly rough and so uneven that Arthur Ames fell and broke a leg when playing. The court was used by the Ames family, who lived nearby.”

Ames Street was developed in two parts. The first part was opened in 1905 to enable access to 39 sections. These included some in Beach Road and some along Ames Street up to the stream, as the map of the subdivision below shows. The 27 remaining sections were advertised as being for sale in 1927.

Ames Street was further expanded after 1940, when the rail system was electrified. More housing was required for the subsequent increase in staff numbers. The Railways Department obtained the land at the very southern end of Ames Street and developed this into a Railway Housing Settlement. The 12 or so houses were occupied by Railway staff until the 1980s when concerns about coastal erosion were raised and staffing requirements in the area were considerably reduced. Staff members and families were relocated to other Railway houses in the village and the houses were sold for removal.

Eventually the area was maintained by the Council and later officially become known as the Ames Street Reserve. 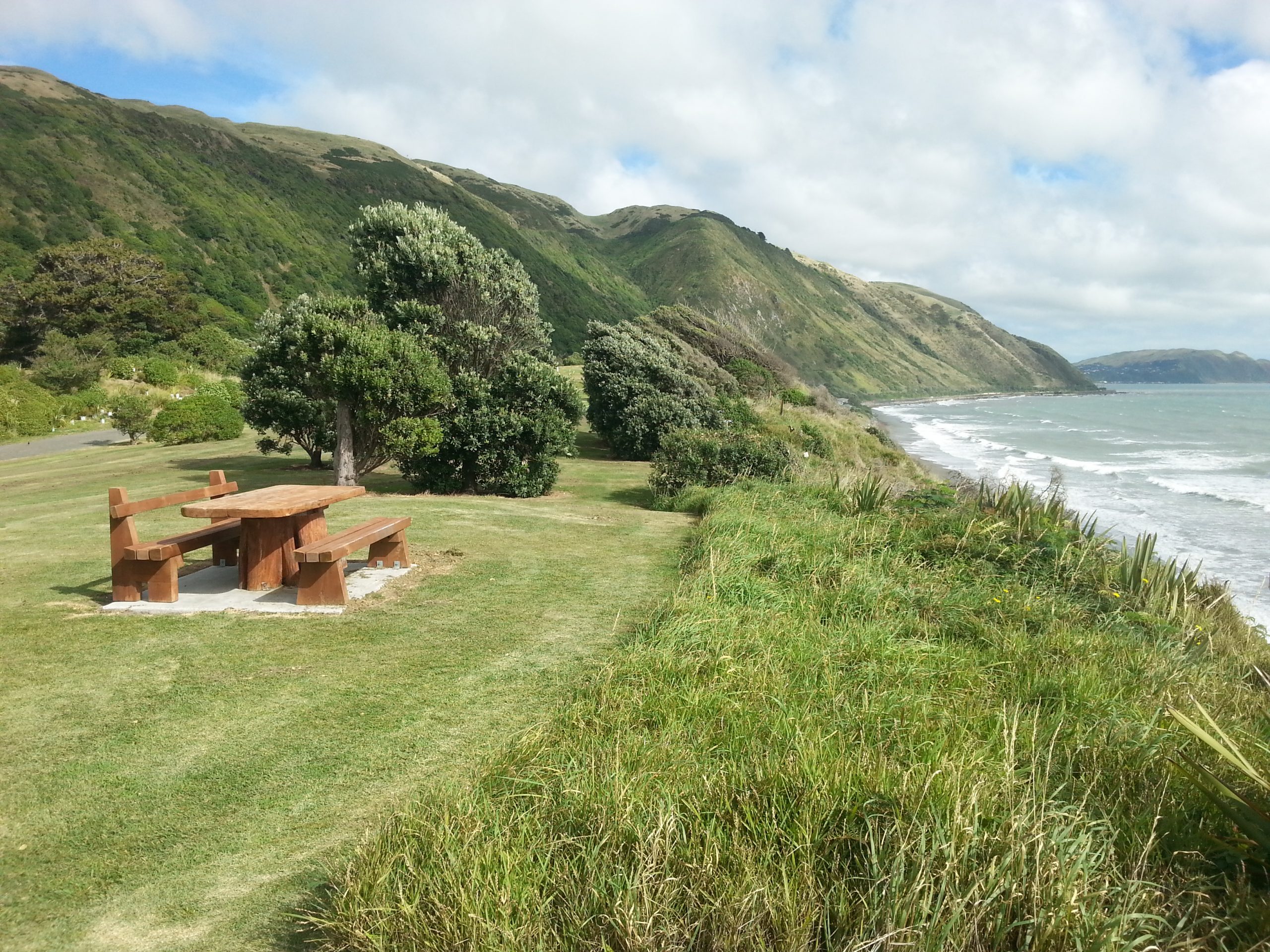 In 2017, a sign board was erected at the entrance to the reserve by the Kāpiti Biodiversity Project to inform visitors to the park that the area is used as a nesting home for the Little Blue Penguin – known as korora. For many years the little penguin has nested in parts of the reserve, especially in the cliff face, as well as under some homes in Ames St.