There has been an accommodation house and inn in this area since the 1840s.

The first was Scotch Jock’s, as it was known. It was a thatched-roof cottage with a chimney and a lean-to set amongst bush. The wayside inn was run by ex-whaler John Nicol (Scotch Jock) and his wife Kahe Te Rau-o-Te-Rangi (Betty Nichol).

The Wellington Independent of 24 April 1847 published a Notice from the Treasury, Wellington, giving notice of the issue of Special Publican’s Licences to, among others, John Nicol, Pukarua ‑ and this was still current in 1864. The paper of 16 September 1869 also carried a lengthy report of legal proceedings relating to the lease of an accommodation or public house at Paekākāriki, on land owned by Betty Nicol.

In the days before European settlement in Paekākāriki, there was a small Māori pā there. The area was contested by Māori groups including Rangitāne and Muaūpoko. During the 1820s the great war leader Te Rauparaha defeated and expelled the earlier inhabitants and claimed the region for Ngāti Toa and its allies. Ngāti Haumia, a hapū of Ngāti Toa, built their pā by the mouth of the Wainui steam at the northern end of Paekākāriki. Te Rauparaha, whose pā was on nearby Kapiti Island, died in 1849.

Scotch Jock (or Jack) Nicol (1789‑1886) was a whaler and trader, originally from Dundee. He was one of the first Europeans associated with early Paekākāriki. As a whaler, he roamed about Cook Strait and the east coast and was well known to local Māori . He married a woman of high birth, Kahe Te Rau-o-Te-Rangi, also known as Betty.

Kahe Te Rau‑o‑Te‑Rangi (who died in1871) achieved fame by swimming from Kapiti Island to the mainland near Waikanae (about 5 kilometres) with her child, Makere, strapped to her back to warn of an impending tribal attack.

Kahe, of Ngāti Toa and Ngāti Mutunga (North Taranaki) decent, was one of 13 high-ranked Māori women who signed the Treaty of Waitangi. More would have added their names in ink to the founding document if they had been allowed – but the prejudices of those collecting signatures stopped them. In early Victorian New Zealand woman did not yet have the vote and were seen as second‑class citizens by some signature collectors. In protest at this, Māori pointed out that the document was an agreement with a woman – Queen Victoria – so why shouldn’t they sign?

Kahe Te Rau‑o‑Te‑Rangi’s cousin, Te Rangi Topeora, another woman who was held in high regard, also signed the Treaty on Kāpiti.

On 10 November 1841, Kahe and John Nicol were formally married on board a ship off the coast of Kāpiti Island. The pair had been together for many years and had children, but the formalisation of the partnership was probably in recognition of the changing world they lived in. Ngāti Toa were taking on Christian values, recognising the importance of embracing change and all it brought.

Kahe and John raised their family at the Paekākāriki Inn, and Betty was well known to travellers along the coast for her hospitality. Governor George Grey often stayed at the inn and took two of the couple’s children away to be educated. Tragically, the children both died. One of Betty and Scotch Jock’s daughters later became the mother of Sir Maui Pomare (1875), a prominent Māori doctor and politician.

With the coming of the railway in 1886, Scotch Jock’s Inn was gone and replaced with a double storey Hotel. Paekākāriki’s station platform was right alongside the hotel and so conveniently situated that passengers could step out of their carriages, straight into the refreshment room/bar. The hotel was built in 1869 and housed the original Paekākāriki Post Office, which was later moved to the Railway Station.

One of Paekākāriki’s oldest buildings used to sit behind the hotel and serving as a part-time garage. We believe this is what remained of the horse stables from yesteryear, and since has also been used as a store house, and even the village jail (note the bars on the windows).

Timeline of the Paekākāriki Hotel

1880 – 26 July: The well known roadside inn kept by E.M. Symonds, of Paekākāriki, was burnt to the ground. None of the furniture was saved.

1881 – 17 June: Fred Bills acquired the lease of land on which stood Paekākāriki Hotel

1883 – 06 June: Mr Bills granted accommodation house license – Upper Hutt Court Condition – To keep the light burning from sunset to sunrise at the point where the main road turns in from the beach.

1889: Charles Slight became the new proprietor, close to the Railway Station, Paekākāriki. Three times the house was burnt down, the first portion of the present building having been erected in 1883, and the front portion six years later. Mr Slight, the landlord, whose father landed with the 65th regiment at Paremata in 1846, was born in 1851 in Wanganui. He has had a varied experience as a farmer, carpenter, police officer, and hotel-keeper.

1897– 5 August NZ Mail
In a publichouse at Paekākāriki may be seen a relic of ancient days, in the shape of the upper portion of a skull through which a strange old-fashioned axe has been driven and is still firmly wedged. The trophy was accidentally fished up from the bottom of a shallow pool at Paekākāriki.

The building was owned by Mr Anyon who was residing in Fiji at the time. A quarter of an hour after the alarm was raised the building was in ruins. It is just 12 months since Mr Hilton entered into possession of the house. The post office and telephone bureau situated about 100 yards from the hotel escaped without injury.

The next hotel was built further to the south of the earlier buildings in the early 1900 ‘s.

In an advertisement from November 1915, “Paekākāriki is recognised, and admitted, by most people to be the best seaside resort there is, and the Hotel there under Mr Quirk’s management affords the very best accommodation. The house has recently been completely overhauled, and many improvements effected to it, and can be proclaimed first-class in every respect.” 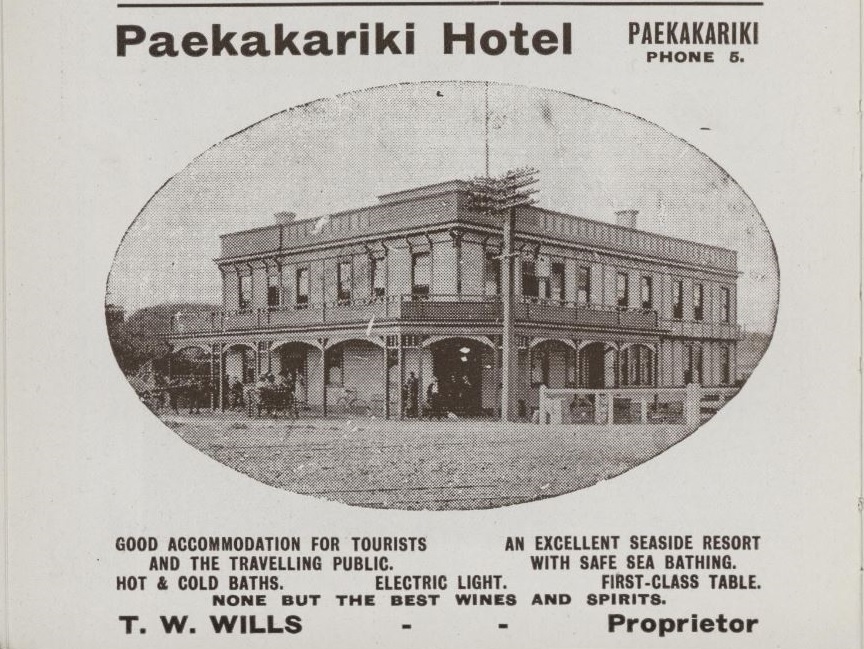 1961 Dance Floor added to beside hotel where beer garden used to be. Could be classed as one of Wellington’s earliest night clubs. It was run by Cross Roads Entertainment Venue until approximately 1995.

1980 The Debreceny era began. John and wife, Lorraine, provided more than a bed and feed for guests at Paekākāriki Hotel. When guests in marital strife sought temporary refuge there, he was always ready with a sympathetic ear. Son Craig Debreceny and wife Itiria took over control of the hotel around 2000 and in 2001 the Next Door restaurant was constructed in place of the dance area.

2003 Tilley, Wellington and Beach Road areas including shops were flooded.

This turned out to be the beginning of the end and the Hotel was closed in August 2005 and then demolished with the remaining rubbish set on fire for several weeks.

Some of the existing furniture and oddments went up for sale, with the Station Trust removing old weatherboards to later be used in the Signal Box restoration.

It was a sad day when the hotel was no more.

2007: The current hotel was opened and has since undergone some changes. An existing bar area was turned into a boutique cinema and after several years changed again to a bottle store.

A new restaurant, bar, and accommodation area was constructed along with a series of apartments at the rear section.