The Paekākāriki Lawn Tennis Club was formally incorporated in 1931, and celebrated its Golden Jubilee in 1981.

On 18 October 1921, the Evening Post reported that in February that year several Wellington tennis enthusiasts had journeyed to Paekākāriki to play a friendly match against the local club. Mr. Charles Gray, of Pukerua Bay, had been instrumental in getting the players to make the trip. The local Paekākāriki team consisted of Miss Foster, Miss Brien and Clothier, F. Smith, W. Smith and Lynch.

A decade later, in 1931, the Paekākāriki Lawn Tennis Club was formally incorporated. This was later followed by the construction of a new pavilion, funded by donations from the community.

Mr Arthur Law was one of the club’s key benefactors for many years. Several club trophies are named after him and there was also an inter-school tennis competition for the Arthur Law Cup. He also attended many of the prizegiving and always had a pocketful of 10 shilling and pound notes that he would give out to those children who could answer questions about the club.

The Evening Post went on to describe the pavilion:

The building, which is large and spacious, comprises a very fine common room 20ft by 24ft, an up-to-date kitchen fitted with cupboards and all the latest conveniences, two dressing rooms fitted with wash basins, hot and cold shower houses, lockers for the use of members, and an office for the secretary, neatly furnished with a roll-top desk, carpet, and chairs. An electric hot-water system has been installed for supplying hot water to the kitchen and shower houses. The common room is equipped with two ping-pong tables with special lights above each. A wide veranda overlooking three excellent courts provides seating accommodation for approximately 50 people.

The club’s secretary, Mr. W. G. Smith, and his committee were thanked for their work in facilitating this project.

In 1981, the club celebrated its Golden Jubilee, with a healthy turnout. 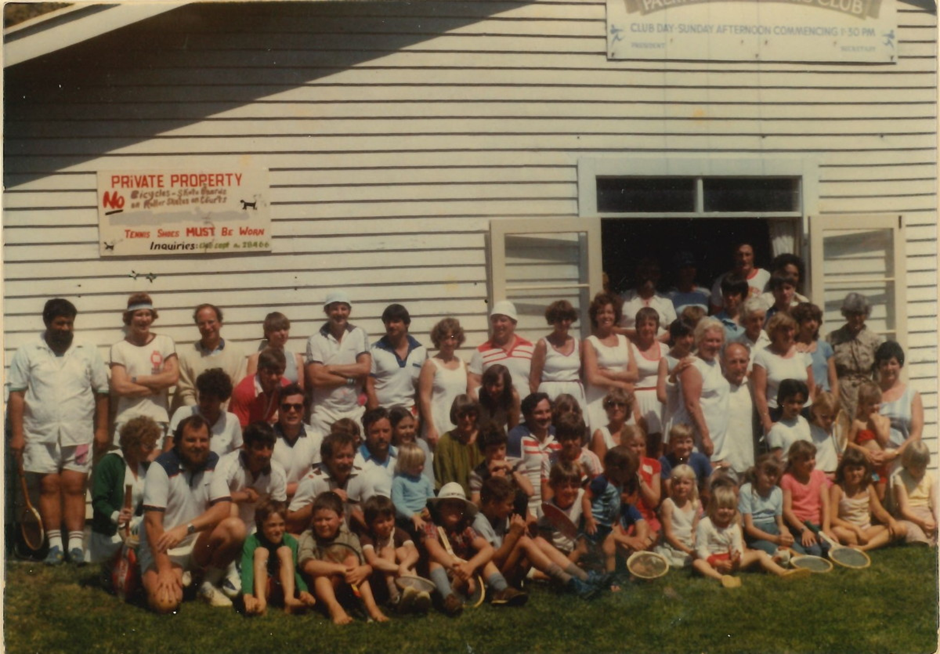 Membership of the club was constant for many years, with club championships, competitions and interclub series occurring regularly (Joan Hilder, Paekākāriki Xpressed, May 23 2008).

The club ran many activities, including fully-attended club day tennis every Sunday in summer, club social evenings, fundraising efforts when opportunities arose, and working-bees on clubhouse painting, court-lines painting, mowing lawns, caring for trees and hedges, and whatever else needed attending to. With all this voluntary work helping to cut expenses, and with a lot of paid-up members, subs could be kept low, yet still be sufficient to buy paint, nets and other maintenance materials, plus pay rates, power and insurance. However expensive major items such as court resurfacing and court fence replacing were always hard to fund.

Railway staff, many of whom resided in Tilley Road cottages, continued to be well represented in all the club’s activities from the time of its inception until the 1990s. Following the privatisation of New Zealand Rail and resulting job cuts in the early 1990s, for financial reasons many left the village.

By the mid-1990s, membership was low, the courts were in poor condition and all money was going into maintaining the historic clubhouse. Low membership around this time also partly reflected a national trend of falling membership among tennis clubs.

In 2008, the club was offered as a ‘gift’ to the Kāpiti Coast District Council (KCDC). (Don Polly, Paekākāriki Xpressed, 15 February 2008). The conditions of ‘gifting’ the club were that the valuable land could not be sold by the Council, and that the courts and nets needed ongoing upkeep. The Paekākāriki Tennis Club would assume more of a caregiver role with regard to the club.

One of the main reasons for offering the club to the Council was the high cost of upkeep, particularly the court surfaces which had suffered during the Paekākāriki floods of October 2003. Also, the nets and fence needed repair and replacement, but the club could no longer afford to finance them. In the past, the clubhouse and outdoors had always been maintained by club volunteers at working bees, but it was getting harder to get people involved in working bees due to diminishing membership.

Meanwhile, the Council was looking for somewhere to house the local library. So with an eye to the future, the club felt it prudent to gift the facility to the Council for the benefit of both parties. By doing so, the Council would obtain a library building and more reserve land in the village, and the tennis club would no longer face maintenance costs.

Under an agreement, signed in November 2010, ownership of the Paekākāriki Tennis Club was passed to KCDC who took responsibility for maintaining and refurbishing the club’s facilities. The club agreed to pay $1 a year for a licence to use the courts for its activities, as well as managing any other use of them.

Soon after the Council took ownership, $79,000 was spent on upgrading the court surfaces, and another $39,000 on renovating the building and adapting it to also serve as a community library.

With brand new, visually appealing and easy-on-the-body astro turf court surfaces, there was renewed interest in tennis from the community. The new courts immediately attracted many locals back to tennis as well as people from further north who preferred astro turf. At the same time, a new proactive committee was also formed. Volunteers offered to run a women’s club night and juniors on Sunday mornings.

In 2013, the singles club championships, which had not been run for 19 years, were reinstated. The following season saw the introduction of a mixed club night and more tournaments. One women’s midweek interclub team had been entered consistently from the 1990s and, by 2014, there were two women’s midweek, one men’s and two junior interclub teams.

The Club continues to thrive, with high community membership, several interclub teams, regular club days and a range of championships.

Over time, the club house has served as the original playcentre building, the village library, the Buffalo Lodge, and many other community activities.